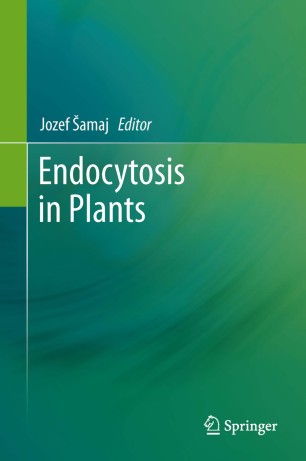 Endocytosis is a fundamental cellular process by means of which cells internalize extracellular and plasma membrane cargos for recycling or degradation. It is important for the establishment and maintenance of cell polarity, subcellular signaling and uptake of nutrients into specialized cells, but also for plant cell interactions with pathogenic and symbiotic microbes. Endocytosis starts by vesicle formation at the plasma membrane and progresses through early and late endosomal compartments. In these endosomes cargo is sorted and it is either recycled back to the plasma membrane, or degraded in the lytic vacuole. This book presents an overview of our current knowledge of endocytosis in plants with a main focus on the key molecules undergoing and regulating endocytosis. It also provides up to date methodological approaches as well as principles of protein, structural lipid, sugar and microbe internalization in plant cells. The individual chapters describe clathrin-mediated and fluid-phase endocytosis, as well as flotillin-mediated endocytosis and internalization of microbes. The book was written for a broad spectrum of readers including students, teachers and researchers.

Jozef Šamaj received his Ph.D. degree in Plant Physiology from Comenius University in Bratislava, Slovakia. He completed three post-doctoral stays in France, Germany and Austria, supported by Eurosilva, the Alexander von Humboldt Foundation, and the Marie Curie Programme. He co-edited four books and co-authored more than 115 research papers, reviews and book chapters. He received his habilitation degree from the University of Bonn’s Institiute of Cellular and Molecular Botany in 2004, where he was a senior lecturer and group leader. Since 2010, he has been a full professor and department leader at the Palacky University Olomouc’s Centre of the Region Haná for Biotechnological and Agricultural Research. His research is focused on the functional characterization of mitogen-activated protein kinases as well as cytoskeletal and vesicular trafficking proteins during plant development and stress responses. His laboratory is using integrated cell-biological, genetic and functional proteomic approaches.