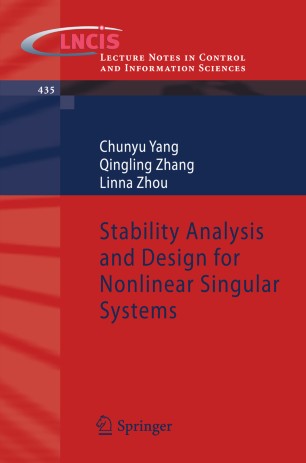 Practical stability, being quite different from stability in the sense of Lyapunov, is a significant performance specification from an engineering point of view. The basic concepts and results on practical stability for standard state-space systems were generalized to singular systems. For Lur’e type descriptor systems (LDS) which were the feedback interconnection of a descriptor system with a static nonlinearity, strongly absolute stability was defined and Circle criterion and Popov criterion were derived. The notion of input-state stability (ISS) for nonlinear singular systems was defined based on the concept of ISS for standard state-space systems and the characteristics of singular systems. LMI-based sufficient conditions for ISS of Lur’e singular systems were proposed. Furthermore, observer design for nonlinear singular systems was studied and some observer design methods were proposed by the obtained stability results and convex optimization algorithms. Finally, absolute stability and multi-objective control of nonlinear singularly perturbed systems were considered. By Lyapunov functions, absolute stability criteria of Lur’e singularly perturbed systems were proposed and multi-objective control of T-S fuzzy singularly perturbed systems was achieved. Compared with the existing results, the obtained methods do not depend on the decomposition of the original system and can produce a determinate upper bound for the singular perturbation parameter.