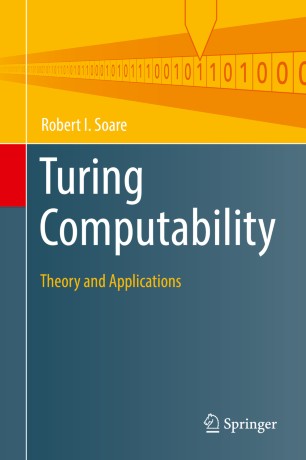 Turing's famous 1936 paper introduced a formal definition of a computing machine, a Turing machine. This model led to both the development of actual computers and to computability theory, the study of what machines can and cannot compute. This book presents classical computability theory from Turing and Post to current results and methods, and their use in studying the information content of algebraic structures, models, and their relation to Peano arithmetic. The author presents the subject as an art to be practiced, and an art in the aesthetic sense of inherent beauty which all mathematicians recognize in their subject.

Part I gives a thorough development of the foundations of computability, from the definition of Turing machines up to finite injury priority arguments. Key topics include relative computability, and computably enumerable sets, those which can be effectively listed but not necessarily effectively decided, such as the theorems of Peano arithmetic. Part II includes the study of computably open and closed sets of reals and basis and nonbasis theorems for effectively closed sets. Part III covers minimal Turing degrees. Part IV is an introduction to games and their use in proving theorems. Finally, Part V offers a short history of computability theory.

The author is a leading authority on the topic and he has taught the subject using the book content over decades, honing it according to experience and feedback from students, lecturers, and researchers around the world. Most chapters include exercises, and the material is carefully structured according to importance and difficulty. The book is suitable for advanced undergraduate and graduate students in computer science and mathematics and researchers engaged with computability and mathematical logic.

Robert Soare is the Paul Snowden Russell Distinguished Service Professor Emeritus of Mathematics and Computer Science at the University of Chicago. He was the founding chairman of the Department of Computer Science in 1983. He has supervised the dissertations of nineteen Ph.D. students using the content of this book. He wrote the primary reference on computability theory for students and researchers: Recursively Enumerable Sets and Degrees: A Study of Computable Functions and Computably Generated Sets (Springer, 1987). He is the author of numerous papers on computability theory and mathematical logic. His 1974 Annals of Mathematics paper on automorphisms of computably enumerable sets was selected in the 2003 book by Gerald Sacks as one of the most important in mathematical logic in the twentieth century. He has been an invited speaker at the International Congress of Mathematicians, and a plenary speaker at the International Congress of Logic, Methodology, and Philosophy of Science, the Association of Symbolic Logic Centennial in 2000, the British Mathematical Colloquium in 2012, the Royal Society Meeting on the Incomputable in 2012, and Computability in Europe (CiE) in 2007 and 2012.  He was the winner of the 2011 University of Chicago Award for Excellence in Graduate Teaching and is a Fellow of the American Mathematical Society.

“At a time when computability theory is enjoying remarkable activity and fruitfulness, and benefiting from having a large number of students and young researchers, there is no question that the subject is ready for a new standard introductory text. The present book shares all the features that helped its predecessor become such a standard thirty years ago, and at the same time, it is modern, and it is relevant to today’s state of the field. The subject will be well-served by it.” (Damir D. Dzhafarov, Bulletin of Symbolic Logic, Vol. 23 (1), March, 2017)
Buy options