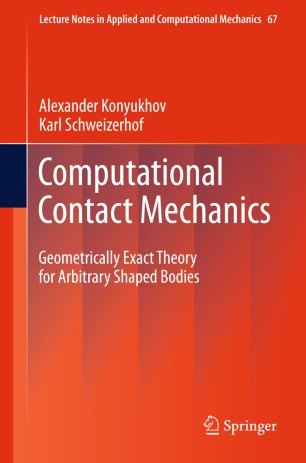 This book contains a systematical analysis of geometrical situations  leading to  contact pairs -- point-to-surface, surface-to-surface, point-to-curve, curve-to-curve and curve-to-surface.  Each contact pair  is inherited with a special coordinate system based on its geometrical properties such as a Gaussian surface coordinate system or a Serret-Frenet curve coordinate system.  The formulation in a covariant form allows in a straightforward fashion to consider various constitutive relations for a  certain pair such as anisotropy for both frictional and structural parts. Then standard methods well known in computational contact mechanics such as penalty, Lagrange multiplier methods, combination of both and others  are formulated in these coordinate systems. Such formulations require then the powerful apparatus of differential geometry of surfaces and curves as well as of convex analysis. The final goals of such transformations are  then ready-for-implementation numerical algorithms within the finite element method including any arbitrary discretization techniques such as high order and isogeometric finite elements, which are most convenient for the considered geometrical situation.

The book proposes a consistent study of geometry and kinematics, variational formulations, constitutive relations for surfaces and discretization techniques for all considered geometrical pairs and  contains the associated  numerical analysis as well as some new analytical results in contact mechanics.