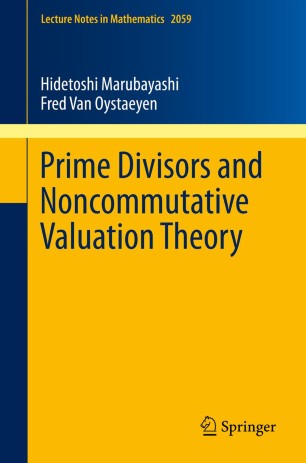 Classical valuation theory has applications in number theory and class field theory as well as in algebraic geometry, e.g. in a divisor theory for curves.  But the noncommutative equivalent is mainly applied to finite dimensional skewfields.  Recently however, new types of algebras have become popular in modern algebra; Weyl algebras, deformed and quantized algebras, quantum groups and Hopf algebras, etc. The advantage of valuation theory in the commutative case is that it allows effective calculations, bringing the arithmetical properties of the ground field into the picture.  This arithmetical nature is also present in the theory of maximal orders in central simple algebras.  Firstly, we aim at uniting maximal orders, valuation rings, Dubrovin valuations, etc. in a common theory, the theory of primes of algebras.  Secondly, we establish possible applications of the noncommutative arithmetics to interesting classes of algebras, including the extension of central valuations to nice classes of quantized algebras, the development of a theory of Hopf valuations on Hopf algebras and quantum groups, noncommutative valuations on the Weyl field and interesting rings of invariants and valuations of Gauss extensions.