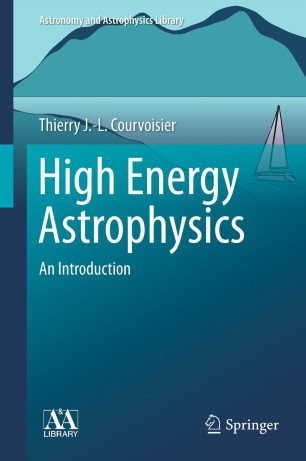 High-energy astrophysics has unveiled a Universe very different from that only known from optical observations. It has revealed many types of objects in which typical variability timescales are as short as years, months, days, and hours (in quasars, X-ray binaries, and other objects), and even down to milli-seconds in gamma ray bursts. The sources of energy that are encountered are only very seldom nuclear fusion, and most of the time gravitation, a paradox when one thinks that gravitation is, by many orders of magnitude, the weakest of the fundamental interactions. The understanding of these objects' physical conditions and the processes revealed by high-energy astrophysics in the last decades is nowadays part of astrophysicists' culture, even of those active in other domains of astronomy.

This book evolved from lectures given to master and PhD students at the University of Geneva since the early 1990s. It aims at providing astronomers and physicists intending to be active in high-energy astrophysics a broad basis on which they should be able to build the more specific knowledge they will need. While in the first part of the book the physical processes are described and derived in detail, the second part studies astrophysical objects in which high-energy astrophysics plays a crucial role. This two-pronged approach will help students recognise physical processes by their observational signatures in contexts that may differ widely from those presented here.