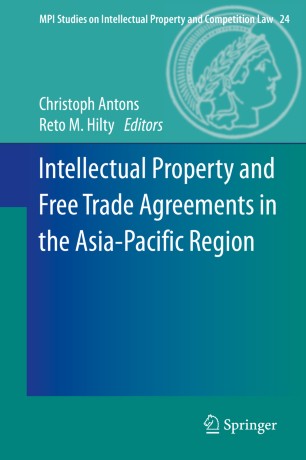 Intellectual Property and Free Trade Agreements in the Asia-Pacific Region

This book is highly topical. The shift from the multilateral WTO negotiations to bilateral and regional Free Trade Agreements has been going on for some time, but it is bound to accelerate after the WTO Doha round of negotiations is now widely regarded as a failure. However, there is a particular regional angle to this topic as well. After concluding that further progress in the Doha round was unlikely, Pacific Rim nations recently have progressed with the negotiations of a greatly expanded Trans-Pacific Partnership Agreement that includes industrialised economies and developed countries such as the United States, Japan, Australia and New Zealand, recently emerged economies such as Singapore, but also several developing countries in Asia and Latin America such as Malaysia and Vietnam. US and EU led efforts to conclude FTAs with Asia-Pacific nations are also bound to accelerate again, after a temporary slowdown in the negotiations following the change of government in the United States and the expiry of the US President’s fast-track negotiation authority. The book will provide an assessment of these dynamics in the world’s fastest growing region. It will look at the IP chapters from a legal perspective, but also put the developments into a socio-economic and political context. Many agreements in fact are concluded because of this context rather than for purely economic reasons or to achieve progress in fields like IP law. The structure of the book follows an outline that groups countries into interest alliances according to their respective IP priorities. This ranges from the driving forces of the EU, US and Japan, via Asia-Pacific resource-rich but IP poor economies such as Australia and New Zealand, recently emerged economies with strong IP systems such as Singapore and Korea to leading developing countries such as China and India and ‘second tier industrializing economies’ such as Thailand, Malaysia and Indonesia.​