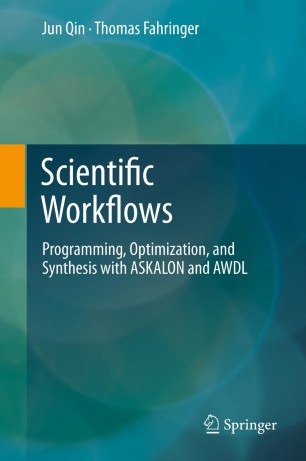 Programming, Optimization, and Synthesis with ASKALON and AWDL

Creating scientific workflow applications is a very challenging task due to the complexity of the distributed computing environments involved, the complex control and data flow requirements of scientific applications, and the lack of high-level languages and tools support. Particularly, sophisticated expertise in distributed computing is commonly required to determine the software entities to perform computations of workflow tasks, the computers on which workflow tasks are to be executed, the actual execution order of workflow tasks, and the data transfer between them.

Qin and Fahringer present a novel workflow language called Abstract Workflow Description Language (AWDL) and the corresponding standards-based, knowledge-enabled tool support, which simplifies the development of scientific workflow applications. AWDL is an XML-based language for describing scientific workflow applications at a high level of abstraction. It is designed in a way that allows users to concentrate on specifying such workflow applications without dealing with either the complexity of distributed computing environments or any specific implementation technology. This research monograph is organized into five parts: overview, programming, optimization, synthesis, and conclusion, and is complemented by an appendix and an extensive reference list.

The topics covered in this book will be of interest to both computer science researchers (e.g. in distributed programming, grid computing, or large-scale scientific applications) and domain scientists who need to apply workflow technologies in their work, as well as engineers who want to develop distributed and high-throughput workflow applications, languages and tools.

Dr. Jun Qin received his MS degree in Computer Science from Beijing Institute of Technology, Beijing, China, in 2002, and completed his PhD degree in Computer Science from the University of Innsbruck, Austria, in 2010. His research interests include programming languages, workflows, scientific computing, parallel and distributed computing, and high-performance computing. He is currently working for Amadeus, the leading provider of IT solutions to the tourism and travel industry.

Prof. Dr. Thomas Fahringer is a Professor of Computer Science and head of the Institute of Computer Science at the University of Innsbruck. His research interests are in programming languages, workflow systems, Grid and Cloud computing, high performance and multi-core parallel computing. He has published over 160 papers in the area of performance-oriented parallel and distributed high-performance computing including 30 journal articles, 3 books and has won 3 best paper awards at top ranking IEEE and ACM conferences.

“The research monography introduces the abstract workflow description language, shortly AWDL … . The research community involved in workflow technologies will find in this book an excellent overview of the current state of the art the field … . Scientists from various research fields will find in the book several well described examples of scientific workflows to be followed. … the book can be used as a guide for AWDL in practical lessons about workflow technologies at undergraduate or graduate studies in distributed computing.” (Dana Petcu, Zentralblatt MATH, Vol. 1252, 2012)