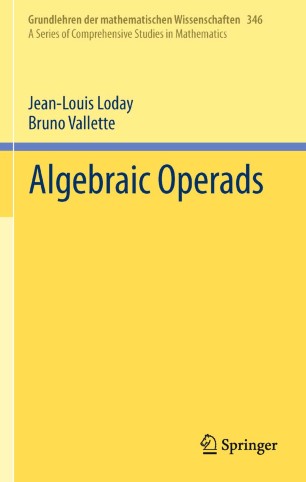 In many areas of mathematics some “higher operations” are arising. These have become so important that several research projects refer to such expressions. Higher operations form new types of algebras. The key to understanding and comparing them, to creating invariants of their action is operad theory. This is a point of view that is 40 years old in algebraic topology, but the new trend is its appearance in several other areas, such as algebraic geometry, mathematical physics, differential geometry, and combinatorics.

The present volume is the first comprehensive and systematic approach to algebraic operads. An operad is an algebraic device that serves to study all kinds of algebras (associative, commutative, Lie, Poisson, A-infinity, etc.) from a conceptual point of view. The book presents this topic with an emphasis on Koszul duality theory. After a modern treatment of Koszul duality for associative algebras, the theory is extended to operads. Applications to homotopy algebra are given, for instance the HomotopyTransfer Theorem. Although the necessary notions of algebra are recalled, readers areexpected to be familiar with elementary homological algebra. Each chapter ends with a helpful summary and exercises. A full chapter is devoted to examples, and numerous figures are included.

After an elementary chapter on classical algebra, accessible to undergraduate students, the level increases gradually through the book. However, the authors have done their best to make it suitable for graduate students: three appendices  review the basic results needed in order to understand the various  chapters. Since higher algebra is becoming essential in several research areas like deformation theory, algebraic geometry, representation theory, differential geometry, algebraic combinatorics, and mathematical physics, the book can also be used as a reference work by researchers.

Jean-Louis Loday has worked in algebraic K-theory, algebraic topology, noncommutative geometry and higher algebra. He is the author of "Cyclic Homology" a worldwide reference, published as volume 301 in the Grundleheren der mathematischen Wissenschadften. He is an editor of several mathematical journals and several Proceedings. He has organized six of the annual conferences "Operads 20xx" (starting in 2004).

Bruno Vallette has worked on operads since his first years in mathematical research. He is the author of 10 research articles and a specialist of properads and of Batalin-Vilkovisky algebras.

Loday and Vallette organized several summer schools and international conferences on the subject (France, China, Norway) and published the Proceedings of these conferences.

“It is a welcome addition to the existing literature and will, no doubt, become a standard reference for many authors working in this quickly developing field. … it is an impressive piece of work, which gives a comprehensive account of the foundations of the theory of algebraic operads, starting from the most basic notions, such as associative algebras and modules. It will be of interest to a broad swath of mathematicians: from undergraduate students to experts in the field.” (Andrey Yu. Lazarev, Mathematical Reviews, March, 2013)
Buy options