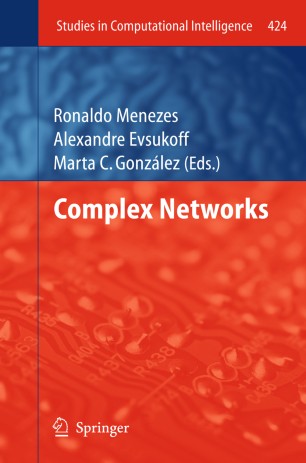 In the last decade we have seen the emergence of a new inter-disciplinary field focusing on the understanding of networks which are dynamic, large, open, and have a structure sometimes called random-biased. The field of Complex Networks is helping us better understand many complex phenomena such as the spread of  deseases, protein interactions, social relationships, to name but a few.

Studies in Complex Networks are gaining attention due to some major scientific breakthroughs proposed by network scientists helping us understand and model interactions contained in large datasets. In fact, if we could point to one event leading to the widespread use of complex network analysis is the availability of online databases. Theories of Random Graphs from Erdös and Rényi from the late 1950s led us to believe that most networks had random characteristics. The work on large online datasets told us otherwise. Starting with the work of Barabási and Albert as well as Watts and Strogatz in the late 1990s, we now know that most real networks are characterized by degree distributions that fit a power law (scale-free networks), and that they are highly clustered with small average path lengths between its nodes (small-world networks).

It is therefore safe to state that the field of Complex Networks (sometimes called Network Sciences) is one of the most promising interdisciplinary disciplines of today. The sample of works in this book gives as a taste of what is in the horizon such controlling the dynamics of a network and in the network, using social interactions to improve urban planning, ranking in music and other art forms, and the understanding of knowledge transfer in influence networks.