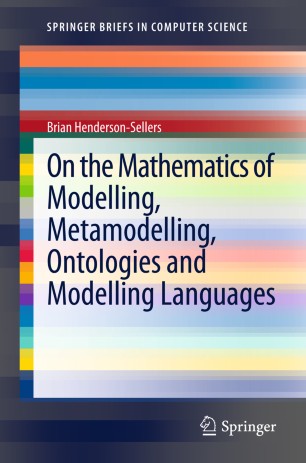 On the Mathematics of Modelling, Metamodelling, Ontologies and Modelling Languages

Computing as a discipline is maturing rapidly. However, with maturity often comes a plethora of subdisciplines, which, as time progresses, can become isolationist. The subdisciplines of modelling, metamodelling, ontologies and modelling languages within software engineering e.g. have, to some degree, evolved separately and without any underpinning formalisms.

Introducing set theory as a consistent underlying formalism, Brian Henderson-Sellers shows how a coherent framework can be developed that clearly links these four, previously separate, areas of software engineering. In particular, he shows how the incorporation of a foundational ontology can be beneficial in resolving a number of controversial issues in conceptual modelling, especially with regard to the perceived differences between linguistic metamodelling and ontological metamodelling. An explicit consideration of domain-specific modelling languages is also included in his mathematical analysis of models, metamodels, ontologies and modelling languages.

This encompassing and detailed presentation of the state-of-the-art in modelling approaches mainly aims at researchers in academia and industry. They will find the principled discussion of the various subdisciplines extremely useful, and they may exploit the unifying approach as a starting point for future research.

Brian Henderson-Sellers is the Director of the Centre for Object Technology Applications and Research, and Professor of Information Systems at the University of Technology, Sydney (UTS). He is the author of over a dozen books on object and agent technologies and is well-known for his work in OO methodologies (MOSES, COMMA, OPEN, OOSPICE) and in OO metrics.

Brian is the Chief Editor of the International Journal on Agent-Oriented Software Engineering and has previously served as Regional Editor of Object-Oriented Systems, a member of the editorial board of Object Magazine/Component Strategies, and as an Object Expert for many years. He is currently on the editorial board of Journal of Object Technology and Software and Systems Modelling. He was the Founder of the Object-Oriented Special Interest Group of the Australian Computer Society (NSW Branch) and Chairman of the Computerworld Object Developers' Awards committee for ObjectWorld 94 and 95 (Sydney). He is a frequently invited speaker at international OT conferences. In 1999, he was voted number 3 in the Who's Who of Object Technology (Handbook of Object Technology, CRC Press, Appendix N).  He has been a member of the Review Panel for the OMG's Software Process Engineering Model (SPEM) standards initiative, a member of the UML2.0 review team, and Co-Editor of the ISO/IEC 24744 International Standard. In July 2001, Brian was awarded a Doctor of Science (DSc) from the University of London for his research contributions in object-oriented methodologies and, in 2010, the Consensus IT Professionals Award.

"This book (…)  is a thoroughly researched and insightful essay on the mathematical bases of modeling and ontologies." Anthony J. Duben, ACM Computing Reviews, November 2012

“This book emphasizes the areas of modelling, metamodelling, ontologies and modelling languages. … it tries to find a mathematical background for the unification of these areas. … A useful booklet that contributes to the understanding of this difficult area.” (Christian Posthoff, Zentralblatt MATH, Vol. 1254, 2013)