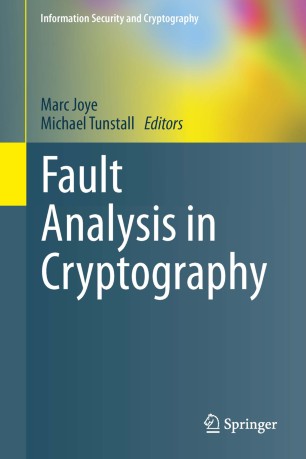 In the 1970s researchers noticed that radioactive particles produced by elements naturally present in packaging material could cause bits to flip in sensitive areas of electronic chips. Research into the effect of cosmic rays on semiconductors, an area of particular interest in the aerospace industry, led to methods of hardening electronic devices designed for harsh environments. Ultimately various mechanisms for fault creation and propagation were discovered, and in particular it was noted that many cryptographic algorithms succumb to so-called fault attacks.

This is the first book on this topic and will be of interest to researchers and practitioners engaged with cryptographic engineering.

Dr. Marc Joye gained a Habilitation (HDR) degree in Computer Science from the Université de Toulouse II in 2003; from 1999 to 2006, he worked in the Card Security Group of Gemplus (now Gemalto), and he has been a member of the Security & Content Protection Labs of Technicolor since 2006; he has published over 100 scientific articles on many aspects of cryptology, including side-channel attacks and fault attacks. Dr. Mike Tunstall is a researcher in the Bristol Cryptography Group at the University of Bristol; his research interests include smart card security, secure embedded software design; fault-based differential cryptanalysis, fault attacks, and side-channel analysis.

"Fault attacks is an active area of research in cryptography, currently explored in hundreds of research papers and dedicated conferences. This book is the first comprehensive treatment of the subject covering both the theory and practice of these attacks as well as defense techniques. ... Preventing fault attacks without sacrificing performance is nontrivial.  Over the years a number of innovative ideas have been proposed for efficiently verifying cryptographic computations. Many defense strategies are described in the book, some of which are already deployed in real-world cryptographic libraries. Nevertheless, many implementations remain vulnerable. I was thrilled to see the material covered in the book and hope that it will make fault defense standard practice in the minds of developers." (Dan Boneh, Stanford University)

"Among the well-studied side-channel analysis techniques, fault analysis might be the most powerful for recovering the secret value in the computation of a cryptographic algorithm. ... This book contains sufficient information for people who have not studied fault analysis before. It will be a handy book for self-study for both security engineers and academic researchers."  (Zheng Gong, Computing Reviews, October 11, 2012)