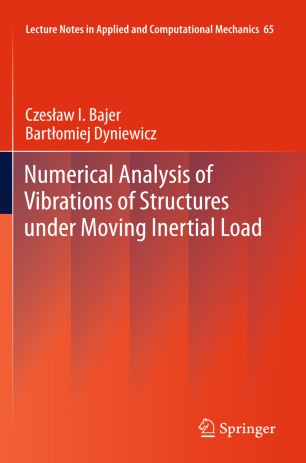 Numerical Analysis of Vibrations of Structures under Moving Inertial Load

Moving inertial loads are applied to structures in civil engineering, robotics, and mechanical engineering. Some fundamental books exist, as well as thousands of research papers. Well known is the book by L. Frýba, Vibrations of Solids and Structures Under Moving Loads, which describes almost all problems concerning non-inertial loads.
This book presents broad description of numerical tools successfully applied to structural dynamic analysis. Physically we deal with non-conservative systems. The discrete approach formulated with the use of the classical finite element method results in elemental matrices, which can be directly added to global structure matrices. A more general approach is carried out with the space-time finite element method. In such a case, a trajectory of the moving concentrated parameter in space and time can be simply defined.
We consider structures described by pure hyperbolic differential equations such as strings and structures described by hyperbolic-parabolic differential equations such as beams and plates. More complex structures such as frames, grids, shells, and three-dimensional objects, can be treated with the use of the solutions given in this book.