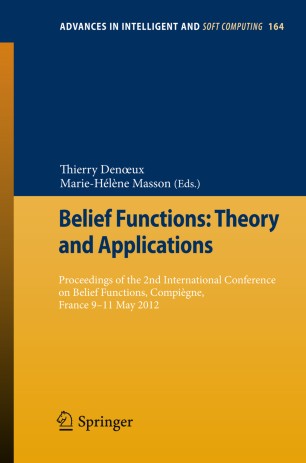 Proceedings of the 2nd International Conference on Belief Functions, Compiègne, France 9-11 May 2012

Part of the Advances in Intelligent and Soft Computing book series (AINSC, volume 164)

The theory of belief functions, also known as evidence theory or Dempster-Shafer theory, was first introduced by Arthur P. Dempster in the context of statistical inference, and was later developed by Glenn Shafer as a general framework for modeling epistemic uncertainty. These early contributions have been the starting points of many important developments, including the Transferable Belief Model and the Theory of Hints. The theory of belief functions is now well established as a general framework for reasoning with uncertainty, and has well understood connections to other frameworks such as probability, possibility and imprecise probability theories.

This volume contains the proceedings of the 2nd International Conference on Belief Functions that was held in Compiègne, France on 9-11 May 2012. It gathers 51 contributions describing recent developments both on theoretical issues (including approximation methods, combination rules, continuous belief functions, graphical models and independence concepts) and applications in various areas including classification, image processing, statistics and intelligent vehicles.