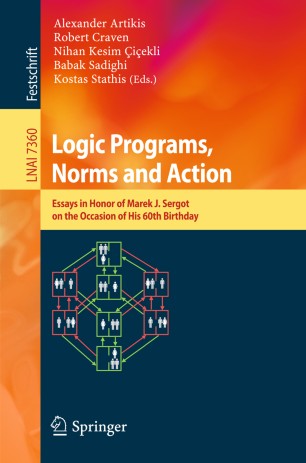 Essays in Honor of Marek J. Sergot on the Occasion of His 60th Birthday

This book is dedicated to Marek Sergot, Professor in Computational Logic at Imperial College London, on the occasion of his 60th birthday. Professor Sergot’s scientific contributions range over many different fields. He has developed a series of novel ideas and formal methods bridging areas including artificial intelligence, computational logic, philosophical logic, legal theory, artificial intelligence and law, multi-agent systems and bioinformatics. By combining his background in logic and computing with his interest in the law, deontic logic, action, and related areas, and applying to all his capacity to understand the subtleties of social interaction and normative reasoning, Professor Sergot has opened up new directions of research, and has been a reference, an inspiration, and a model for many researchers in the fields to which he has contributed. The Festschrift includes several reminiscences and introductory essays describing Professor Sergot's achievements, followed by a series of articles on logic programming, temporal reasoning and action languages, artificial intelligence and law, deontic logic and norm-governed systems, and logical approaches to policies.