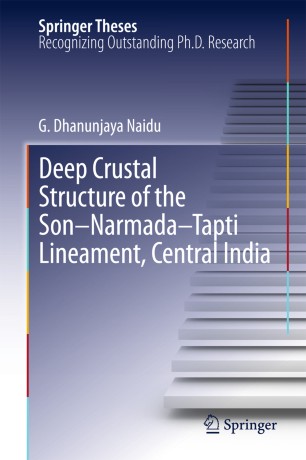 With a length of about 1200 km, the Son-Narmada-Tapti Lineament (NSL) is one of the most prominent geomorphic features in the Indian subcontinent. Anomalous conductive bodies are delineated at mid-lower crustal depths below major earthquake epicentral zones. The region has been interpreted as the collision zone of the Indian Plate with the Eurasian Plate. The NSL zone is therefore also known to be the second most important tectonic feature, after the Himalayas, in the Indian geology.

The present thesis describes significant new insight into the seismotectonics of this Central India tectonic zone, based on thorough magnetotelluric studies. The main objectives of the present study are: (i) to delineate subtrappean sediments across the NSL region along four different traverses, (ii) to understand the characterization of geo-electrical structure of the crust and examine the nature of geo-electrical signatures of the known faults, (iii) to integrate the results with other geophysical data such as seismicity, gravity and heat flow, in order to understand the tectonic scenario of the region.

Deep electromagnetic (magnetotelluric) analyses were integrated in this study with gravity, seismic and heat flow studies and distinct, delineated deep crustal features. The resulting high conductivity is justified with the presence of fluids at mid-lower crustal depths. The migration of these fluids from mantle to mid-lower crustal depths through pre-existing brittle fracture/fault zones were obviously caused by the plume related to the Deccan volcanism. Migration of the fluids generated a higher fluid pressure along the faults and resulted in earthquakes.

Based on the geo-electric sections derived along the four traverses of the Narmada-Son Lineament Zone, the present study gives important clues on the subduction/collision history in this important tectonic zone.