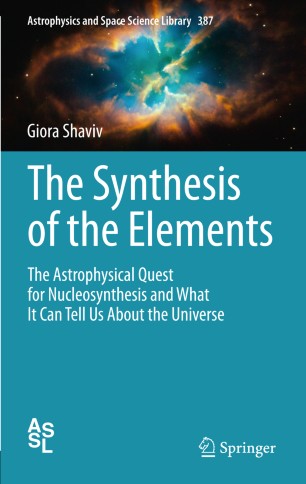 The Synthesis of the Elements

This book describes the origins and evolution of the chemical elements  we and the cosmos are made of. The story starts with the discovery of the common elements on Earth and their subsequent discovery in space. How do we learn the composition of the distant stars? How did progress in quantum theory, nuclear physics, spectroscopy, stellar structure and evolution, together with observations of stars, converge to provide an incredibly detailed picture of the universe? How does research in the micro-world explain the macro-world? How does progress in one affect the other, or lack of knowledge in one inhibit progress in the other? In short, Shaviv describes how we discovered the various pieces of the jigsaw that form our present picture of the universe; and how we sometimes put these in the wrong place before finding in the right one.

En route we meet some fascinating personalities and learn about heated controversies. Shaviv shows how science lurched from one dogma  to the next, time and again shattering much of what had been considered solid knowledge, until eventually a stable understanding arose.