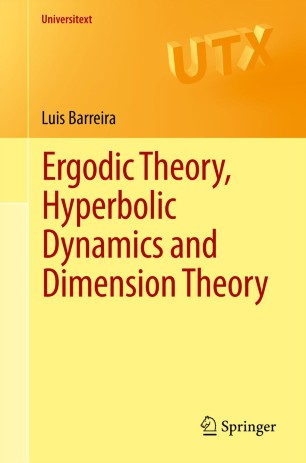 The volume is primarily intended for graduate students interested in dynamical systems, as well as researchers in other areas who wish to learn about ergodic theory, thermodynamic formalism, or dimension theory of hyperbolic dynamics at an intermediate level in a sufficiently detailed manner. In particular, it can be used as a basis for graduate courses on any of these three subjects. The text can also be used for self-study: it is self-contained, and with the exception of some well-known basic facts from other areas, all statements include detailed proofs.

Luís Barreira is a Professor of Mathematics at Instituto Superior Técnico, in Lisbon. He is the author of 15 books, including 5 research monographs published by AMS, Birkhäuser, Cambridge and Springer, and several textbooks in various languages. He is also the author of more than 130 articles in mathematics, mainly in differential equations and dynamical systems.

“This book gives an introduction to the fundamental ideas and results in the study of dynamical systems that lie at the interface of ergodic theory, thermodynamic formalism, hyperbolic dynamics, and dimension theory. It is targeted at readers, particularly graduate students, who are familiar with the general theory of measure and integration … . theory is developed in a self-contained manner and the book contains a wealth of exercises that give examples illustrating the concepts from the main text and also suggest further directions of exploration.” (Vaughn Climenhaga, Mathematical Reviews, July, 2013)

“This textbook is a careful and well thought out introduction to the dimension theory of dynamical systems, including a full development of the needed tools and examples from ergodic theory and hyperbolic dynamics. … the book is aimed at graduate students and researchers interested in learning about ergodic theory, dimension theory, or hyperbolic dynamics. A substantial number of exercises of varying levels is included, and the care with which the material is presented as a self-contained coherent account makes it viable for independent study.” (Thomas B. Ward, Zentralblatt MATH, Vol. 1262, 2013)
Buy options