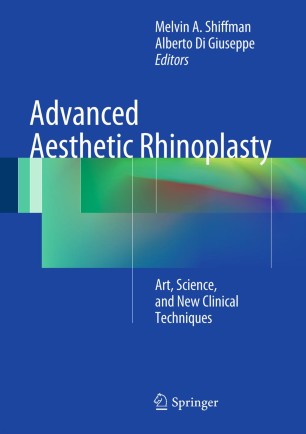 Aesthetic rhinoplasty is among the most common aesthetic operations in the field of facial aesthetic plastic surgery, but it is also viewed as one of the most complex. This comprehensive book provides a wealth of up-to-date information on advanced aesthetic rhinoplasty techniques. After discussion of anatomy, psychological issues, and preoperative planning, a wide range of primary and secondary rhinoplasty techniques are described clearly and in detail with the aid of numerous high-quality color illustrations. The use of fillers in rhinoplasty, ethnic variations in anatomy and techniques, and possible risks and complications are all clearly explained. This book is intended primarily for experienced surgeons in the fields of plastic surgery, cosmetic surgery, general surgery, otolaryngology, ophthalmology, oral maxillofacial surgery, and cosmetic surgical subspecialties. It will also be an invaluable resource for residents and fellows.

Alberto Di Giuseppe, MD, has been Senior Registrar of the Plastic Surgery Department of the University of Ancona since 1982, and is also Associate Professor of Plastic and Aesthetic Surgery at the University of Oradea, Romania and Associate Professor of Surgery at the Lipoplasty University of Austin, Texas, USA. After obtaining his Bachelor of Medicine and Surgery at Bologna University, he attended the Schools of Specialization in Plastic Surgery and Maxillofacial Surgery at Parma University, achieving board certification in both specialties. Dr. Di Giuseppe continued his training in England, serving as registrar and then senior registrar at the Plastic Surgery Center Mount Vernon Hospital of North Wood (Middlesex) and the Victoria Queen Hospital of East Grinstead (Sussex).  Afterwards he attended the Hand Surgery Center at Utah University of Salt Lake City, directed by Prof. G. Lister. Dr. Di Giuseppe practices the full range of plastic surgery with an emphasis on aesthetic surgery, and has vast experience in all facial, aesthetic, and reconstructive procedures.  He is a Board Member of the European Academy of Cosmetic Surgery.