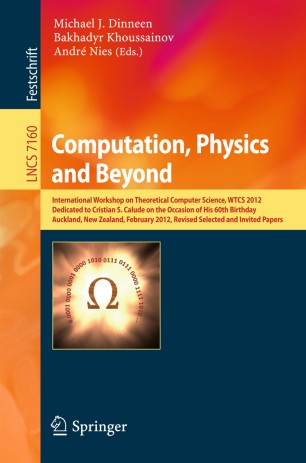 Computation, Physics and Beyond

This Festschrift volume has been published in honor of Cristian Calude on the occasion of his 60th birthday and contains contributions from invited speakers and regular papers presented at the International Workshop on Theoretical Computer Science, WTCS 2012, held in Auckland, New Zealand, in February 2012.

Cristian Calude has made a significant contribution to research in computer science theory. Along with early work by Chaitin, Kučera, Kurtz, Solovay, and Terwijn his papers published in the mid-1990s jointly with Khoussainov, Hertling, and Wang laid the foundation for the development of modern theory of algorithmic randomness. His work was essential for establishing the leading role of New Zealand in this area.

The research interests of Cristian Calude are reflected in the topics covered by the 32 papers included in this book, namely: algorithmic information theory, algorithms, automata and formal languages, computing and natural sciences, computability and applications, logic and applications, philosophy of computation, physics and computation, and unconventional models of computation. They have been organized into four parts. The first part consists of papers discussing his life achievements. This is followed by papers in the three general areas of complexity, computability, and randomness; physics, philosophy (and logic), and computation; and algorithms, automata, and formal models (including unconventional computing).