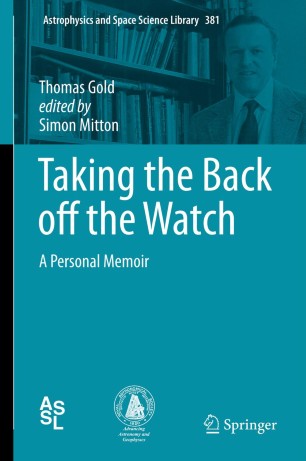 Taking the Back off the Watch

Thomas Gold (1920-2004) had a curious mind that liked to solve problems. He was one of the most remarkable astrophysicists in the second half of the twentieth century, and he attracted controversy throughout his career. Based on a full-length autobiography left behind by Thomas Gold, this book was edited by the astrophysicist and historian of science, Simon Mitton (University of Cambridge).

The book is a retrospective on Gold’s remarkable life. He fled from Vienna in 1933, eventually settling in England and completing an engineering degree at Trinity College in Cambridge. During the war, he worked on naval radar research alongside Fred Hoyle and Hermann Bondi – which, in an unlikely chain of events, eventually led to his working with them on steady-state cosmology. In 1968, shortly after their discovery, he provided the explanation of pulsars as rotating neutron stars.

In his final position at Cornell, he and his colleagues persuaded the US Defense Department to fund the conversion of the giant radio telescope at Arecibo in Puerto Rico into a superb instrument for radio astronomy. Gold’s interests covered physiology, astronomy, cosmology, geophysics, and engineering.

Written in an intriguing style and with an equally intriguing foreword by Freeman Dyson, this book constitutes an important historical document, made accessible to all those interested in the history of science.