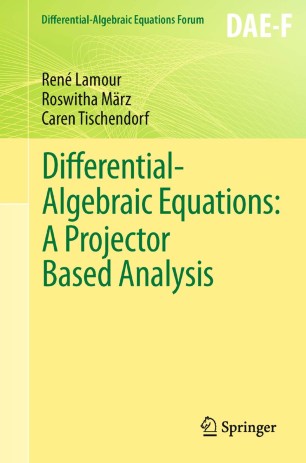 Differential-Algebraic Equations: A Projector Based Analysis

Differential algebraic equations (DAEs), including so-called descriptor systems, began to attract significant research interest in applied and numerical mathematics in the early 1980s, no more than about three decades ago. In this relatively short time, DAEs have become a widely acknowledged tool to model processes subjected to certain constraints in order to simulate and to control processes in various application fields such as network simulation, chemical kinematics, mechanical engineering and systems biology.
DAEs and their more abstract versions in infinite dimensional spaces comprise a great potential for the future mathematical modeling of complex coupled processes.
The purpose of the book is to expose the impressive complexity of general DAEs from an analytical point of view, to describe the state of the art as well as open problems and in so doing to motivate further research of this versatile, extraordinary topic from a broader mathematical perspective.
The book elaborates on a new general, structural analysis capturing linear and nonlinear DAEs in a hierarchical way. The DAE structure is exposed by means of special projector functions. Some issues on numerical integration and computational aspects are also treated in this context.

“This book is devoted to the projector-based analysis and numerical treatment of differential-algebraic equations (DAEs), which is a research direction established by Roswitha März (Humboldt University, Berlin, Germany) about 30 years ago. … The book presents a rigorous and detailed analytical treatment of DAEs. … This nicely written book is an excellent textbook addressed to graduate students and researchers, who are interested in DAEs. It is also recommendable for people working on various DAE-related industrial applications.” (Vu Hoang Linh, zbMATH, Vol. 1276, 2014)
Buy options