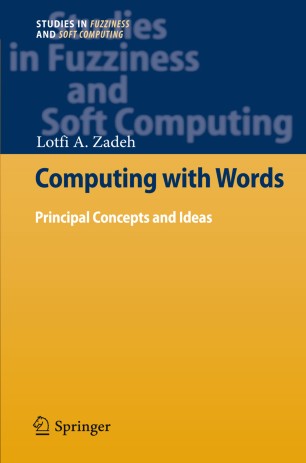 Part of the Studies in Fuzziness and Soft Computing book series (STUDFUZZ, volume 277)

In essence, Computing with Words (CWW) is a system of computation in which the objects of computation are predominantly words, phrases and propositions drawn from a natural language. CWW is based on fuzzy logic. In science there is a deep-seated tradition of according much more respect to numbers than to words. In a fundamental way, CWW is a challenge to this tradition. What is not widely recognized is that, today, words are used in place of numbers in a wide variety of applications ranging from digital cameras and household appliances to fraud detection systems, biomedical instrumentation and subway trains.

CWW offers a unique capability—the capability to precisiate natural language. Unprecisiated (raw) natural language cannot be computed with. A key concept which underlies precisiation of meaning is that of the meaning postulate: A proposition, p, is a restriction on the values which a variable, X—a variable which is implicit in p—is allowed to take.

CWW has an important ramification for mathematics. Addition of the formalism of CWW to mathematics empowers mathematics to construct mathematical solutions of computational problems which are stated in a natural language. Traditional mathematics does not have this capability.