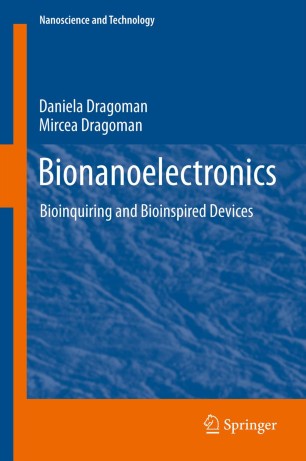 This book presents the achievements in bionanoelectronics in a coherent manner. It deals with nanodevices applied to biostructures, molecular motors, molecular pumps, molecular nanoactuators and electronic biodevices, including nanodevices for sensing and imaging biomolcules. The book describes bionanoelectronics, detection of biomolecules and targets various biological applications such as detection and sequencing of DNA and early detection of various deseases and nanomedicine. Further important topics of the book are biomimetics and bioinspired electronics.The book also deals with biomolecules as building blocks of nanodevices for nanoelectronics or future computing architecture The application of scanning probe techniques to biological samples is described.

He has published 205 scientific papers (114 in international journals and 91 communications at various national and international conferences). The papers are dedicated to the following areas: nanoelectronics, microwaves, MEMS, and optoelectronics. He is co-author of 5 books in prestigious international publishing houses.

Daniela Dragoman is a Professor at the Physics Faculty of the University of Bucharest. In the period 1998-1999 and 2001-2002 she was the recipient of the Humboldt Fellowship award and followed postdoctoral studies at the Mannheim University, Germany. She was invited professor at Univ. Saint-Etienne, France (1997 and 2000), and at CNRS LAAS, Toulouse in 2008, 2009 and 2010.

She is co-author of 5 monographs at prestigious international publishing houses and author or co-author of 152 scientific papers in ISI-ranked international journals and 41 communications at national and international conferences. Her research areas of interest include: nanostructures and nanodevices, quantum-classical correspondence and the foundations of quantum mechanics.