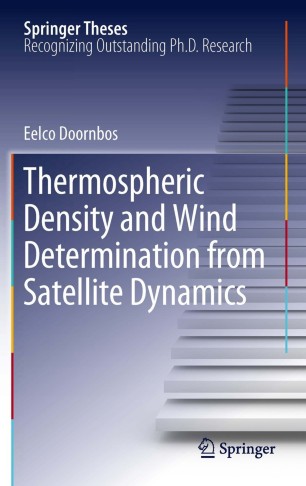 The Earth's atmosphere is often portrayed as a thin and finite blanket covering our planet, separate from the emptiness of outer space. In reality, the transition is gradual and a tiny fraction of the atmophere gases is still present at the altitude of low orbiting satellites. The very high velocities of these satellites ensure that their orbital motion can still be considerably affected by air density and wind. This influence can be measured using accelerometers and satellite tracking techniques.
The opening chapters of this thesis provide an excellent introduction to the various disciplines that are involved in the interpretation of these observations: orbital mechanics, satellite aerodynamics and upper atmospheric physics. A subsequent chapter, at the heart of this work, covers advances in the algorithms used for processing satellite accelerometry and Two-Line Element (TLE) orbit data. The closing chapters provide an elaborate analysis of the resulting density and wind products, which are generating many opportunities for further research, to improve the modelling and understanding of the thermosphere system and its interactions with the lower atmosphere, the ionosphere-magnetosphere system and the Sun.

Eelco Doornbos was born in Groenlo, The Netherlands, on April 8, 1975 and went to school in Cappelle aan den IJssel, Rotterdam and Maastricht. After obtaining his diploma at Sint Maartenscollege in Maastricht, he started studying aerospace engineering at Delft University of Technology in 1994.
His master’s thesis, completed in August 2001, was on the topic of nongravitational force modelling in the orbit determination of ESA’s ERS and Envisat Earth observation satellites. Work on this thesis was performed at Hypersonic Technology Göttingen (HTG), the European Space Operations Centre (ESA/ESOC) in Darmstadt and within the Astrodynamics & Space Systems group at TU Delft.
After graduation, he initially started work on several projects related to satellite radar altimetry and precise orbit determination of radar altimeter satellites. The year 2003 marked the start of a transition to a series of research projects performed for the European Space Agency (ESA), aimed at the development and testing of algorithms for deriving thermospheric density from satellite observations,
and the improvement of thermosphere density models. The work performed for these ESA-funded projects forms the backbone of this thesis.