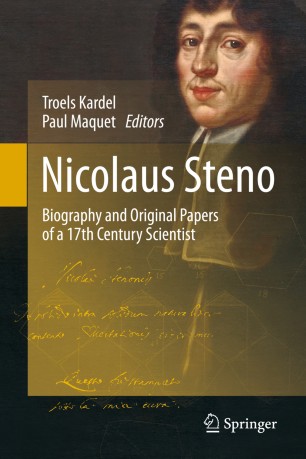 Biography and Original Papers of a 17th Century Scientist

This is by far the most exhaustive biography on Niels Stensen, anatomist, geologist and bishop, better known as "Nicolaus Steno". We learn about the scientist’s family and background in Lutheran Denmark, of his teachers at home and abroad, of his studies and travels in the Netherlands, Belgium, France, Italy, Austria, Hungary, Bohemia and Germany, of his many pioneering achievements in anatomy and geology, of his encounters with Swammerdam, Malpighi and with members of the newly established Royal Society of London and the Accademia del Cimento in Florence, and with the philosopher Spinoza. It further treats Stensen’s religious conversion.
The book includes the full set of Steno's anatomical and geological scientific papers in original language. The editors thoroughly translated the original Latin text to English, and included numerous footnotes on the background of this bibliographic and scientific treasure from the 17th century.

“With this wonderful book … a complete edition of Steno’s thirty-four known scientific works is now available for the first time in the English language. … The present book is now the most important source for studies of Steno’s scientific discoveries and life. … the editors of this volume have done a wonderful job in making the scientific work of one of the more intriguing scientists of the seventeenth century available to a wider audience.” (Jens Morten Hansen, ISIS, Vol. 106 (3), September, 2015)

“The present book on Steno, edited and translated by Troels Kardel and Paul Maquet, is the most important monograph for studies of Steno’s scientific discoveries and life yet written. … With this wonderful book a complete edition of Steno’s 34 known scientific works is available in English for the first time.” (Jens Morten Hansen, Bulletin of the Geological Society of Denmark, March, 2015)

“The book presented here is dedicated to the scientist, anatomist, geologist, theologian and bishop, Niels Stensen. … The book of Kardel and Maquet is important. It will certainly give us a better understanding of the activity of Stensen as a man of science and culture, and a greater attention to his lesser-known works, now finally gathered all together and translated.” (Pina Totaro, Metascience, October, 2014)

“This book thus provides us with a greater understanding of Steno’s contributions to geology in their various contexts. I commend the efforts of the editors in translating and compiling Steno’s work in such a convenient form, and recommend this book to all scholars with an interest in the history of the geological sciences and their contexts.” (Toshihiro Yamada, Episodes, Vol. 36 (4), December, 2013)

“The release of a massive work that is not only a milestone in the Steno-research history, but also an important contribution to the Danish and international science history. ... is in itself valuable, but even more valuable are Steno's own works, now for the first time available in their entirety.” (quote translated, orginial review in Danish language, Helge Kragh, Weekendavisen, February, 2013)