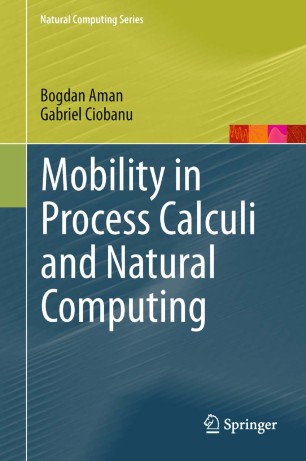 The design of formal calculi in which fundamental concepts underlying interactive systems can be described and studied has been a central theme of theoretical computer science in recent decades, while membrane computing, a rule-based formalism inspired by biological cells, is a more recent field that belongs to the general area of natural computing. This is the first book to establish a link between these two research directions while treating mobility as the central topic.

In the first chapter the authors offer a formal description of mobility in process calculi, noting the entities that move: links (π-calculus), ambients (ambient calculi) and branes (brane calculi). In the second chapter they study mobility in the framework of natural computing. The authors define several systems of mobile membranes in which the movement inside a spatial structure is provided by rules inspired by endocytosis and exocytosis. They study their computational power in comparison with the classical notion of Turing computability and their efficiency in algorithmically solving hard problems in polynomial time. The final chapter deals with encodings, establishing links between process calculi and membrane computing so that researchers can share techniques between these fields.

The book is suitable for computer scientists working in concurrency and in biologically inspired formalisms, and also for mathematically inclined scientists interested in formalizing moving agents and biological phenomena. The text is supported with examples and exercises, so it can also be used for courses on these topics.

Dr. Bogdan Aman graduated in mathematics from the Alexandru Ioan Cuza University of Iaşi, Romania and he received his PhD under the supervision of Prof. Gabriel Ciobanu at the Romanian Academy (Iaşi), Institute of Computer Science. His main research fields are membrane computing, computational modelling for systems biology, and process algebra. Prof. Gabriel Ciobanu has wide-ranging interests in computing including distributed systems, the theory of programming and computational aspects in biology. He has edited around 10 volumes and wrote over 100 papers on these topics; and he has received public recognition for his research, including a Japan Society for the Promotion of Science fellowship in 1995, the Grigore Moisil Award of the Romanian Academy of Sciences in 2000, the Octav Mayer Award of the Romanian Academy (Iaşi) in 2004, and a Royal Society of London international project award in 2009. He is the Editor-in-Chief of the Scientific Annals of Computer Science, and a member of many journal editorial boards and international conference program committees.

“The book is very well written and structured. It provides enough background so that it can be read not only by experts but also by advanced undergraduate and graduate students. … syntax of each formalism is clearly introduced and their operational semantics are unambiguously defined. … Throughout the book, examples with illustrative figures are used to introduce the key definitions and concepts. Exercises are also provided that can guide the reader to more advanced analysis.” (Mario Jesús Pérez-Jiménez, Mathematical Reviews, March, 2014)
Buy options