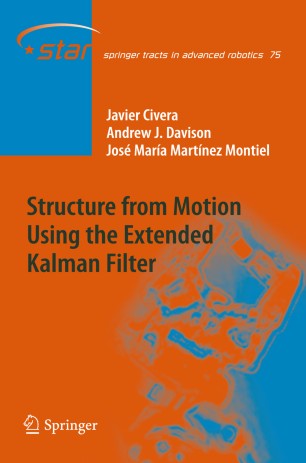 The fully automated estimation of the 6 degrees of freedom camera motion and the imaged 3D scenario using as the only input the pictures taken by the camera has been a long term aim in the computer vision community. The associated line of research has been known as Structure from Motion (SfM). An intense research effort during the latest decades has produced spectacular advances; the topic has reached a consistent state of maturity and most of its aspects are well known nowadays. 3D vision has immediate applications in many and diverse fields like robotics, videogames and augmented reality; and technological transfer is starting to be a reality.

This book describes one of the first systems for sparse point-based 3D reconstruction and egomotion estimation from an image sequence; able to run in real-time at video frame rate and assuming quite weak prior knowledge about camera calibration, motion or scene. Its chapters unify the current perspectives of the robotics and computer vision communities on the 3D vision topic: As usual in robotics sensing, the explicit estimation and propagation of the uncertainty hold a central role in the sequential video processing and is shown to boost the efficiency and performance of the 3D estimation. On the other hand, some of the most relevant topics discussed in SfM by the computer vision scientists are addressed under this probabilistic filtering scheme; namely projective models, spurious rejection, model selection and self-calibration.