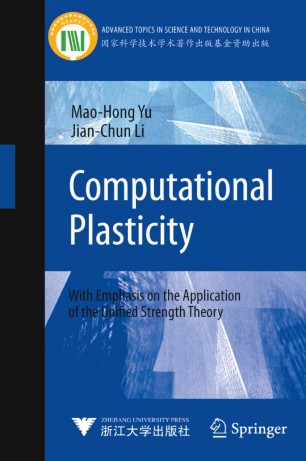 With Emphasis on the Application of the Unified Strength Theory

This monograph describes the unified strength theory and associated flow rule, the implementation of these basic theories in computational programs, and shows how a series of results can be obtained by using them. The unified strength theory has been implemented in several special nonlinear finite-element programs and commercial Finite Element Codes by individual users and corporations. Many new and interesting findings for beams, plates, underground caves, excavations, strip foundations, circular foundations, slop, underground structures of hydraulic power stations, pumped-storage power stations, underground mining, high-velocity penetration of concrete structures, ancient structures, and rocket components, along with relevant computational results, are presented.

This book is intended for graduate students, researchers and engineers working in solid mechanics, engineering and materials science. The theories and methods provided in this book can also be used for other computer codes and different structures. More results can be obtained, which put the potential strength of the material to better use, thus offering material-saving and energy-saving solutions.

Mao-Hong Yu is a professor at the Department of Civil Engineering at Xi'an Jiaotong University, Xi'an, China.