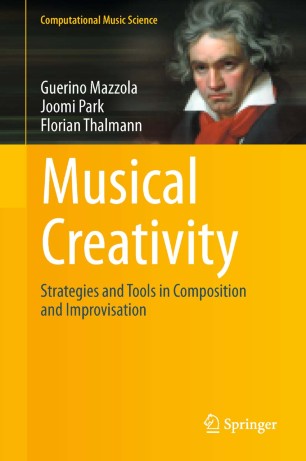 Strategies and Tools in Composition and Improvisation

This book represents a new approach to musical creativity, dealing with the semiotics, mathematical principles, and software for creativity processes.

After a thorough introduction, the book offers a first practical part with a detailed tutorial for students in composition and improvisation, using musical instruments and music software. The second, theoretical part deals with historical, actual, and new principles of creative processes in music, based on the results and methods developed in the first author’s book Topos of Music and referring to semiotics, predicative objects, topos theory, and object-oriented concept architectures. The third part of the book details four case studies in musical creativity, including an analysis of the six variations of Beethoven's sonata op. 109, a discussion of the creative process in a CD coproduced in 2011 by the first and second authors, a recomposition of Boulez’s "Structures pour deux pianos" using the Rubato software module BigBang developed by the third author, and the Escher theorem from mathematical gesture theory in music.

This is both a textbook addressed to undergraduate and graduate students of music composition and improvisation, and also a state-of-the-art survey addressed to researchers in creativity studies and music technology. The book contains summaries and end-of-chapter questions, and the authors have used the book as the main reference to teach an undergraduate creativity studies program and also to teach composition. The text is supported throughout with musical score examples.

Prof. Dr. Guerino Mazzola earned his Ph.D. in Mathematics from Zurich University. He wrote the groundbreaking book The Topos of Music in 2002 -- its formal language and models are used by leading researchers in Europe and North America and have become a foundation of music software design. Prof. Mazzola has a joint appointment as professor in the School of Music and in the Interdisciplinary Program in Collaborative Arts at the College of Liberal Arts, University of Minnesota. Florian Thalmann is a PhD student at the School of Music of the University of Minnesota; he has a degree in computer science from the University of Bern. Dr. Joomi Park is a composer and pianist who performs her own work throughout the United States, Asia and Europe; she received her Ph.D. in music composition at the University of Minnesota; her music was awarded first prize in both the Beethoven Club Composition contest, offered in conjunction with the Belvedere Chamber Music Festival, and the J. Dorfman Memorial Competition, held by ISAM in Germany; she is a faculty member in the McNally Smith College of Music.