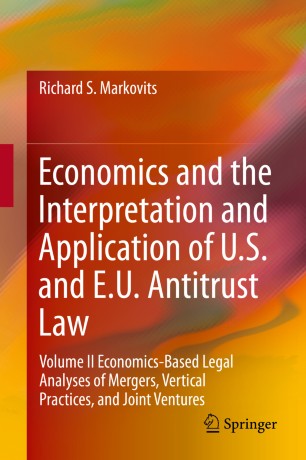 Economics and the Interpretation and Application of U.S. and E.U. Antitrust Law

Volume 2 uses the economic and legal concepts/theories of Volume 1 to (1) analyze the U.S. and E.U. antitrust legality of  mergers, joint ventures, and the pricing-technique and contractual/sales-policy distributor-control surrogates for vertical integration and (2) assess related positions of scholars and U.S. and E.U. antitrust officials. Its analysis of horizontal mergers (1) delineates non-market-oriented protocols for determining whether they manifest specific anticompetitive intent, would lessen competition, or are rendered lawful by the efficiencies they would generate, (2) criticizes the U.S. courts’ traditional market-share/market-concentration protocol, the HHI-oriented protocols of the 1992 U.S. DOJ/FTC Guidelines and the European Commission (EC) Guidelines, and the various non-market-oriented protocols the DOJ/FTC have increasingly been using, (3) argues that, although the 2010 U.S. Guidelines and DOJ/FTC officials discuss market definition as if it matters, those Guidelines actually reject market-oriented approaches, and (4) reviews the relevant U.S. and E.U. case-law. Its analysis of conglomerate mergers (1) shows that they can perform the same legitimate and competition-increasing functions as horizontal mergers and can yield illegitimate profits and lessen competition by increasing contrived oligopolistic pricing and retaliation barriers to investment, (2) analyzes the determinants of all these effects, and (3) assesses limit-price theory, the toe-hold-merger doctrine, and U.S. and E.U. case-law. Its analysis of vertical conduct (1) examines the legitimate functions of each type of such conduct, (2) delineates the conditions under which each manifests specific anticompetitive intent and/or lessens competition, and (3) assesses related U.S. and E.U. case-law and DOJ/FTC and EC positions.  Its analysis of joint ventures (1) explains that they violate U.S. law only when they manifest specific anticompetitive intent while they violate E.U. law either for this reason or because they lessen competition,  (2) discusses the meaning of an “ancillary restraint” and demonstrates that whether a joint-venture agreement would be illegal if it imposed no restraints and whether any restraints imposed are ancillary can be determined only through case-by-case analysis, (3) explains why scholars and officials overestimate the economic efficiency of R&D joint ventures, and (4) discusses related U.S. and E.U. case-law and DOJ/FTC and EC positions.  The study’s Conclusion (1) reviews how its analyses justify its innovative conceptual systems and (2) compares U.S. and E.U. antitrust law as written and as applied.

Richard Markovits, the John B. Connally Chair in Law at the University of Texas, has a Ph.D. in economics (London School of Economics) and an L.L.B. (Yale University). Markovits  has taught in the law or economics faculties of six U.S., two U.K., and 5 German universities. From 1981-83, he was Co-Director of the Centre for Socio-Legal Studies at Oxford. He has also been a panelist for the U.S. NSF and the U.K. SSRC Economics Affairs Committee, a Guggenheim Fellow, and a Fellow of the Wissenschaftskolleg zu Berlin. Markovits has published 58 articles and two books – Matters of Principle (on jurisrprudence and constitutional law) (NYU, 2000) and Truth or Economics (on theoretical and applied welfare economics) (Yale, 2008).