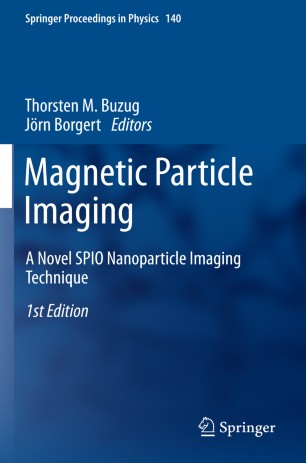 Magnetic Particle Imaging (MPI) is a novel imaging modality. In MPI superparamagnetic iron oxide nanoparticles are used as tracer materials.
The volume is the proceeding of the 2nd international workshop on magnetic particle imaging (IWMPI). The workshop aims at covering the status and recent developments of both, the instrumentation and the tracer material, as each of them is equally important in designing a well performing MPI. For instance, the current state of the art in magnetic coil design for MPI is discussed. With a new symmetrical arrangement of coils, a field-free line (FFL) can be produced that promises a significantly higher sensitivity compared with the standard arrangement for a FFP. Furthermore, the workshop aims at presenting results from phantom and pre-clinical studies.

THORSTEN M. BUZUG was born in Luebeck, Germany, in 1963. He received his Diplom-Physiker degree in 1989 and his Ph.D. in 1993 in Applied Physics both from the Christian-Albrechts-University of Kiel, Germany, where he worked in the field of signal processing applied to chaotic systems. From 1993 to 1994 he had a postdoctoral position at the German Federal Armed Forces Underwater Acoustics and Marine Geophysics Research Institute, where he worked on image acquisition and processing techniques for SONAR applications. In the end of 1994 he joined the Philips Research Laboratories Hamburg, Germany. He was the leader of the Philips Research Cluster Medical Image Processing and responsible for several projects in that field. He has published numerous journal articles, conference papers and books. In October 1998 he was appointed as professor of Physics and Medical Engineering at the RheinAhrCampus Remagen. 2000-2004 he was head of the Academic Development Committee of the RheinAhrCampus Remagen. 2004-2006 he was head of the Joint Council of Campus Departments. In December 2006 he became Director of the Institute of Medical Engeneering at the University of Luebeck.