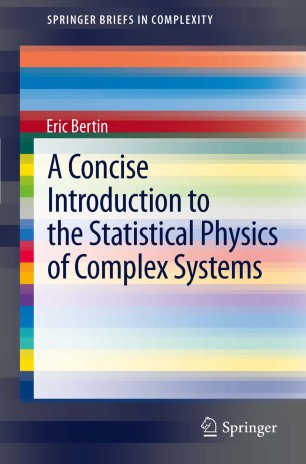 A Concise Introduction to the Statistical Physics of Complex Systems

Part of the SpringerBriefs in Complexity book series (BRIEFSCOMPLEXITY)

This concise primer (based on lectures given at summer schools on complex systems and on a masters degree course in complex systems modeling) will provide graduate students and newcomers to the field with the basic knowledge of the concepts and methods of statistical physics and its potential for application to interdisciplinary topics.

Indeed, in recent years, statistical physics has begun to attract the interest of a broad community of researchers in the field of complex system sciences, ranging from biology to the social sciences, economics and computer science. More generally, a growing number of graduate students and researchers feel the need to learn some basic concepts and questions originating in other disciplines without necessarily having to master all of the corresponding technicalities and jargon. Generally speaking, the goals of statistical physics may be summarized as follows: on the one hand to study systems composed of a large number of interacting ‘entities’, and on the other to predict the macroscopic (or collective) behavior of the system considered from the microscopic laws ruling the dynamics of the individual ‘entities’. These two goals are, to some extent, also shared by what is nowadays called ‘complex systems science’ and for these reasons, systems studied in the framework of statistical physics may be considered as among the simplest examples of complex systems—allowing in addition a rather well developed mathematical treatment.