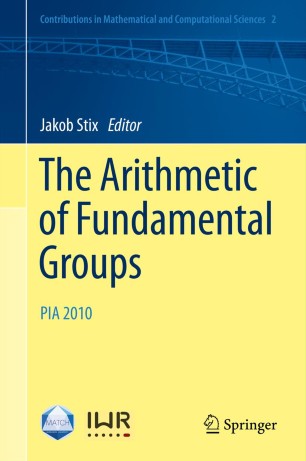 The Arithmetic of Fundamental Groups

Part of the Contributions in Mathematical and Computational Sciences book series (CMCS, volume 2)

In the more than 100 years since the fundamental group was first introduced by Henri Poincaré it has evolved to play an important role in different areas of mathematics. Originally conceived as part of algebraic topology, this essential concept and its analogies have found numerous applications in mathematics that are still being investigated today, and which are explored in this volume, the result of a meeting at Heidelberg University that brought together mathematicians who use or study fundamental groups in their work with an eye towards applications in arithmetic.

The book acknowledges the varied incarnations of the fundamental group: pro-finite, ℓ-adic, p-adic,  pro-algebraic and motivic. It explores a wealth of topics that range from anabelian geometry (in particular the section conjecture), the ℓ-adic polylogarithm, gonality questions of modular curves, vector bundles in connection with monodromy, and relative pro-algebraic completions, to a motivic version of Minhyong Kim's non-abelian Chabauty method and p-adic integration after Coleman. The editor has also included the abstracts of all the talks given at the Heidelberg meeting, as well as the notes on Coleman integration and on Grothendieck's fundamental group with a view towards anabelian geometry taken from a series of introductory lectures given by Amnon Besser and Tamás Szamuely, respectively.