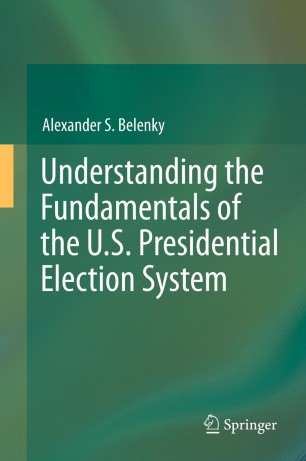 Understanding the Fundamentals of the U.S. Presidential Election System

This is the first book on the U.S. presidential election system to analyze the basic principles underlying the design of the existing system and those at the heart of competing proposals for improving the system. The book discusses how the use of some election rules embedded in the U.S. Constitution and in the Presidential Succession Act may cause skewed or weird election outcomes and election stalemates. The book argues that the act may not cover some rare though possible situations which the Twentieth Amendment authorizes Congress to address. Also, the book questions the constitutionality of the National Popular Vote Plan to introduce a direct popular presidential election de facto, without amending the Constitution, and addresses the plan’s “Achilles’ Heel.”  In particular, the book shows that the plan may violate the Equal Protection Clause from the Fourteenth Amendment of the Constitution. Numerical examples are provided to show that the counterintuitive claims of the NPV originators and proponents that the plan will encourage presidential candidates to “chase” every vote in every state do not have any grounds. Finally, the book proposes a plan for improving the election system by combining at the national level the “one state, one vote” principle – embedded in the Constitution – and the “one person, one vote” principle. Under this plan no state loses its current Electoral College benefits while all the states gain more attention of presidential candidates.

Alexander S. Belenky is the author of books and scientific articles in the fields of optimization and game theory and their applications in transportation, industry, agriculture, environmental protection, advertising, brokerage, auctioning, and U.S. presidential elections. He is the author of Operations Research in Transportation Systems: Ideas and Schemes of Optimization Methods for Strategic Planning and Operations Management—published by Kluwer Academic Publishers in 1998 and republished by Springer in 2010—which has been adopted by many leading American Universities. Also, he is the author of the books Extreme Outcomes of US Presidential Elections (2003), Winning the US Presidency: Rules of the Game and Playing by the Rules (2004), and How America Chooses Its Presidents (2007, 2009). He was an invited guest on radio and TV talk shows throughout the country in the course of the 2004 election campaign, and he was the invited Guest Editor of Mathematical Modeling of Voting Systems and Elections: Theory and Applications, a special edition of Mathematical and Computer Modelling (2008),

Currently, Alexander S. Belenky is a tenured professor at the Department of Mathematics for Economics and a leading scientist at the Decision Choice and Analysis Laboratory at the National Research University Higher School of Economics in Moscow, Russia, and a visiting scholar at the MIT Center for Engineering Systems Fundamentals. He holds a Ph.D. degree in systems analysis and mathematics and a D.Sc. degree in applications of mathematical methods. His opinion pieces about voting systems have appeared in The Baltimore Sun, The Boston Globe, The Boston Herald, The Christian Science Monitor, The New York Times, The Plain Dealer, Providence Journal and in other newspapers.

“This unique book combines thorough analyses of the constitutional, legal, and mathematical factors surrounding the election of a U.S. president. … the book offers an interesting combination of subjects and modeling techniques. … Belenky outlines several mathematical problems or research agendas that would improve the distribution of voting machines and ensure no voter waits longer than a specified maximum. … it is an invaluable reference to anyone interested in the intersection of mathematics and election systems.” (Jennifer M. Wilson, Mathematical Reviews, March, 2014)
Buy options