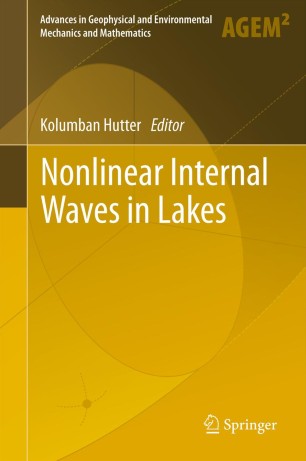 Internal wave dynamics in lakes (and oceans) is an important physical component of geophysical fluid mechanics of ‘quiescent’ water bodies of the Globe. The formation of internal waves requires seasonal stratification of the water bodies and generation by (primarily) wind forces. Because they propagate in basins of variable depth, a generated wave field often experiences transformation from large basin-wide scales to smaller scales. As long as this fission is hydrodynamically stable, nothing dramatic will happen. However, if vertical density gradients and shearing of the horizontal currents in the metalimnion combine to a Richardson number sufficiently small (< ¼), the light epilimnion water mixes with the water of the hypolimnion, giving rise to vertical diffusion of substances into lower depths. This meromixis is chiefly responsible for the ventilation of the deeper waters and the homogenization of the water through the lake depth. These processes are mainly formed as a result of the physical conditions, but they play biologically an important role in the trophicational state of the lake.