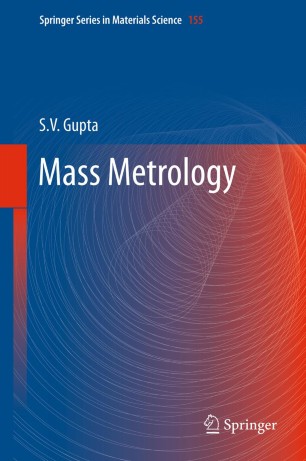 This book presents the practical aspects of mass measurements. Concepts of gravitational, inertial and conventional mass and details of the variation of acceleration of gravity are described. The Metric Convention and International Prototype Kilogram and BIPM standards are described. The effect of change of gravity on the indication of electronic balances is derived with respect of latitude, altitude and earth topography. The classification of weights by OIML is discussed. Maximum permissible errors in different categories of weights prescribed by national and international organizations are presented. Starting with the necessity of redefining the unit kilogram in terms of physical constants, various methods of defining the kilogram in terms of physical constants are described. The kilogram can be defined by Avogadro’s constant, ion collection of some heavy elements, levitation, voltage and Watt Balance. The detection of very small mass of the order of zeptogram through Nanotechnolgy is also discussed. Latest recommendations of CIPM are given.

Connected with metrology for the last 54 years, 37 years of experience in measurement of mass and associated parameters at the National Physical Laboratory (NPL), New Delhi, India, among the firsts to establish the mass measurement facility including evaluation and testing of balances at NPLI. I have first-hand experience of electronic and EMFC balances, retired from National Physical Laboratory from the post of Scientist in-charge Mass, Volume, Density and Viscosity measurements, served in various countries like Cyprus, Syria, Kuwait, Vietnam and Oman as UNIDO advisor and established their measurement laboratories and trained the staff of concerned department in handlings weighing systems of all types, also served as Director Weights and Measures (Legal Metrology) for a few years and brought the Standards of Weights and Measures Act 1976 and developed various sub-ordinate legislations for effective implementation of the Act. Many neighboring and gulf countries have the Weights and Measures Acts based on our W&M ACT of 1976, in constant touch with leading Metrology Laboratories of the world. Academics:MSc (Physics); MSc (Mathematics); PhD Publications: Besides a good number of research papers published in Indian and International journals, following books published: 1999; “A treatise on Standards of Weights and Measures”, running into sixth edition, 667pp, Commercial Law Publishers, New Delhi 2002; “Practical Density Measurement and Hydrometry”; Institute of Physics; U.K pp 352 2004: “Verification of commercial weights”; OIML-E003, International Organization of Legal Metrology, Paris, France , pp 60. 2006: “Comprehensive Volume and Capacity Measurements”, New Age International (Pvt.) Limited, New Delhi, pp 398 2009: A treatise on Indian Boiler Regulations; Commercial Law Publishers, New Delhi, pp 676 2010: “Units of measurement- Past- Present and Future”; Springer, Germany, pp 158