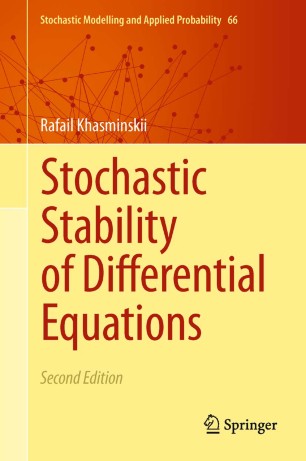 Since the publication of the first edition of the present volume in 1980, the stochastic stability of differential equations has become a very popular subject of research in mathematics and engineering. To date exact formulas for the Lyapunov exponent, the criteria for the moment and almost sure stability, and for the existence of stationary and periodic solutions of stochastic differential equations have been widely used in the literature. In this updated volume readers will find important new results on the moment Lyapunov exponent, stability index and some other fields, obtained after publication of the first edition, and a significantly expanded bibliography.

This volume provides a solid foundation for students in graduate courses in mathematics and its applications. It is also useful for those researchers who would like to learn more about this subject, to start their research in this area or to study the properties of concrete mechanical systems subjected to random perturbations.

“Even more than 40 years after the publication of the first Russian edition, this monograph is still an excellent source for graduate students and researchers … . It is a great introduction to the subject of stochastic stability. Important concepts … are carefully explained, and many different types of stochastic stability are studied. … valuable reference for researchers -- not only researchers in mathematics, but in fact it should also be useful for engineers and physicists interested in stability of systems subject to random forcing.” (Nicolas Perkowski, Zentralblatt MATH, Vol. 1241, 2012)

“This is a comprehensive compendium of results on the stability of stochastic dynamical systems, being the second edition of the English translation of the original Russian work written by a researcher who has made a dominant contribution to the topic. … The bulk of the original text, however, is retained as such. … some of the material here is not often found in standard texts, and this book serves as a valuable source for it.” (Vivek S. Borkar, Mathematical Reviews, January, 2013)