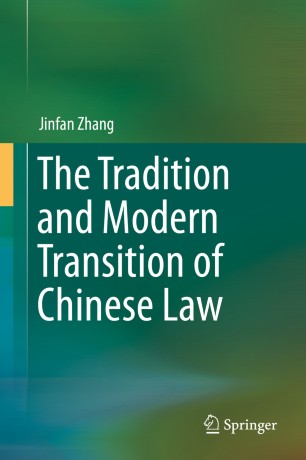 The Tradition and Modern Transition of Chinese Law

The book was first published in 1997, and was awarded the first prize of scientific research by the Ministry of Justice during the ninth Five-Year Plan of China. In 2005, it was adopted the text book for the postgraduates of law majors. In 2009, it was awarded the second prize of the best books on law in China. The book discusses from different aspects the long legal tradition in China, and it not only helps us to have a further understanding of Chinese legal system but also combines theories and practice and illustrate the modern legal transition which probes the history of Chinese legal system.

As is known to us all, China is a country with a long legal history, which can be traced back to more than three thousand year ago. So the legal tradition of China has been passed down from generation to generation without any interruptions. This feature is peculiar to Chinese legal history which is beyond all comparison with that of other countries such as ancient Egypt, ancient India, ancient Babylon and ancient Persia. Through the study of Chinese legal history we can have a deeper understanding of the histories, features, origins and the transition of Chinese legal tradition. The Chinese legal tradition originated from China, and it is the embodiment of the wisdom and creativity of Chinese civilization. The great many books, researching materials, legal constitutions, archives, files and records of different dynasties in China have provided us with rare, complete and systematic materials to research. The book has a complete, systematic and detailed research on Chinese legal tradition and its transition and it gives people a correct recognition of the process of the perfection of laws during its development and its position as well as its value in the social progress in order to grasp its regular patterns. It also has showed us the most valuable part and core of Chinese legal Tradition and it is a summary of Chinese legal tradition and its transition from different perspectives, different angles and different levels. From the book, we can see that the ancient Chinese Legal Culture had once shocked the world and exerted great influence on the civilization of the world legal system, especially the legal systems in Asian countries. The book also has discussed the reestablishment of law in the late Qing Dynasty and the beginning of the Chinese law’s transition to modernity.

In a word, the book has not only combined the legal system and the legal culture together, but also integrated the important historical figures and events ingeniously, and it is a valuable and readable book with authenticity.

Zhang Jinfan, life professor of the University of Political Science and Law, Dean of the Research Center of the Chinese Legal History, academic pacesetter of the Chinese legal history of the PRC, Chairman of the Chinese Legal History Association, has published many important academic works in Chinese legal history and has great influence in and outside China. From 1983 to 1984, he was the director at Postgraduate School of the Chinese University of Political Science and Law, held a concurrent post as the head of China Law History Institute of the Chinese University of Political Science and Law. In 1983, was chosen as the tutor of doctorial students of China Law System History. In 1988, he was endowed as a head of the Association of Chinese legal history. From 1991, he has enjoyed special contribution subsidy of state. At present holds the post of the honorary chairman of China Education Association, the special consultant of China law history Institute, the chairman of China Legal Culture Institute, the executive director of State Taiwan Institute. Zhang Jinfan has published many personal writings such as The History of Law System of China, The Theory of China Law History, Warning from China Law History, The Law System of Antiquity China, Tradition and modern Transformation of Chinese Law, etc,.