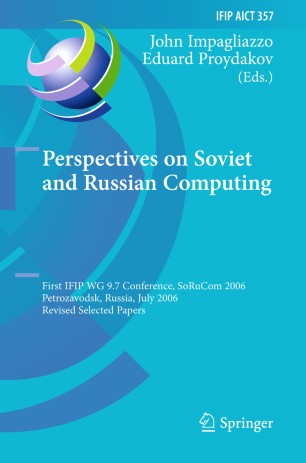 SoRuCom: IFIP Conference on Perspectives on Soviet and Russian Computing

Perspectives on Soviet and Russian Computing

This book contains a collection of thoroughly refereed papers derived from the First IFIP WG 9.7 Conference on Soviet and Russian Computing, held in Petrozavodsk, Russia, in July 2006. The 32 revised papers were carefully selected from numerous submissions; many of them were translated from Russian. They reflect much of the shining history of computing activities within the former Soviet Union from its origins in the 1950s with the first computers used for military decision-making problems up to the modern period where Russian ICT grew substantially, especially in the field of custom-made programming.