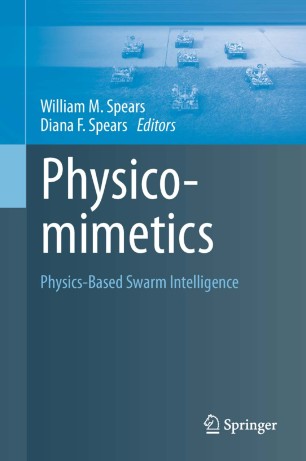 Standard approaches to understanding swarms rely on inspiration from biology and are generally covered by the term “biomimetics”. This book focuses on a different, complementary inspiration, namely physics. The editors have introduced the term "physicomimetics" to refer to physics-based swarm approaches, which offer two advantages. First, they capture the notion that “nature is lazy", meaning that physics-based systems always perform the minimal amount of work necessary, which is an especially important advantage in swarm robotics. Second, physics is the most predictive science, and can reduce complex systems to simple concepts and equations that codify emergent behavior and help us to design and understand swarms.

The editors consolidated over a decade of work on swarm intelligence and swarm robotics, organizing the book into 19 chapters as follows. Part I introduces the concept of swarms and offers the reader a physics tutorial; Part II deals with applications of physicomimetics, in order of increased complexity; Part III examines the hardware requirements of the presented algorithms and demonstrates real robot implementations; Part IV demonstrates how the theory can be used to design swarms from first principles and provides a novel algorithm that handles changing environments; finally, Part V shows that physicomimetics can be used for function optimization, moving the reader from issues of swarm robotics to swarm intelligence. The text is supported with a downloadable package containing simulation code and videos of working robots.

This book is suitable for talented high school and undergraduate students, as well as researchers and graduate students in the areas of artificial intelligence and robotics.