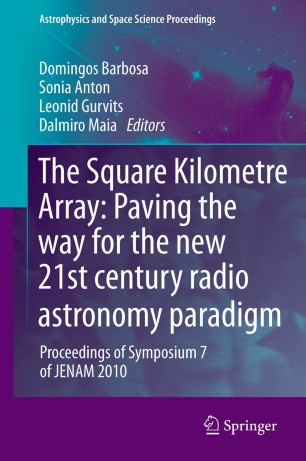 Proceedings of Symposium 7 of JENAM 2010

The Square Kilometre Array (SKA) will provide more than one order of magnitude improvement in sensitivity compared with any existing radio telescope over a wavelength range of several hundred to one, from decametric to microwave wavelengths. It will revolutionize the study of the most abundant element in the Universe, hydrogen, from the epoch of reionisation to the present-day, probing the onset formation period of the very first stars, will closely scan proto-planets and, through the precision timing of pulsars, will detect the distortions of space-time due to gravitational radiation. The SKA is a sensing network spanning 3000 km from its centre and with a collecting area of more than 1 square kilometre, using technologies of the 21st century. The SKA will make the study of a wide range of phenomena initially studied at other wavelengths possible at radio wavelengths, as well as opening a new discovery window on new phenomena at radio wavelengths.
Symposium 7 of the JENAM 2010 aimed at bringing these diverse opportunities to the attention of both theoretical and observational astronomers working at all wavelengths, including the potential for synergies with other facilities. The meeting

·        highlighted the scientific potential of the SKA
·        discussed  scientific priorities and their impact on the design of the SKA
·        explored the synergies between the SKA and other next-generation astronomical facilities in different wavelength domains such as the ALMA, ELTs, LSST, JWST, GRE, IXO, Gaia and Euclid, and high-energy facilities (Auger)
·        explored the “cyber–infrastructure” that may become available for the distribution and distributed analysis of SKA data