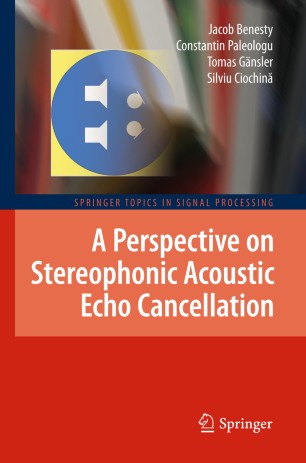 Single-channel hands-free teleconferencing systems are becoming popular. In order to enhance the communication quality of these systems, more and more stereophonic sound devices with two loudspeakers and two microphones are deployed. Because of the coupling between loudspeakers and microphones, there may be strong echoes, which make real-time communication very difficult. The best way we know to cancel these echoes is via a stereo acoustic echo canceller (SAEC), which can be modelled as a two-input/two-output system with real random variables. In this work, the authors recast this problem into a single-input/single-output system with complex random variables thanks to the widely linear model. From this new convenient formulation, they re-derive the most important aspects of a SAEC, including identification of the echo paths with adaptive filters, double-talk detection, and suppression.