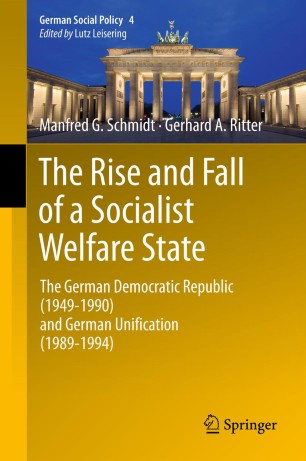 The Rise and Fall of a Socialist Welfare State

This book provides a comprehensive analysis of social policy in the German Democratic Republic (GDR, 1949-1990), followed by an analysis of the “Social Union”, the transformation of social policy in the process of German unification in 1990. Schmidt’s analysis of the GDR also depicts commonalities and differences between the welfare state in East and West Germany as well as in other East European and Western countries. He concludes that the GDR was unable to cope with the trade-off between ambitious social policy goals and a deteriorating economic performance. Ritter embeds his analysis of the Social Union in a general study of German unification, its international circumstances and its domestic repercussions (1989-1994). He argues that social policy played a pivotal role in German unification, and that there was no alternative to extending the West German welfare state to the East. Ritter, a distinguished historian, bases his contribution on an award-winning study for which he drew on archival sources and interviews with key actors. Schmidt is a distinguished political scientist.

Manfred G. Schmidt is Professor for Political Science at the University of Heidelberg. He has widely published on European and international politics. He was awarded the Stein Rokkan Prize for International Comparative Research and the Leibniz Prize.

Gerhard A. Ritter is Professor emeritus for Social History at the University of Munich. He studied history and political science in Berlin and Oxford. He has been awarded honorary doctorates and prizes for his studies in German and comparative history.