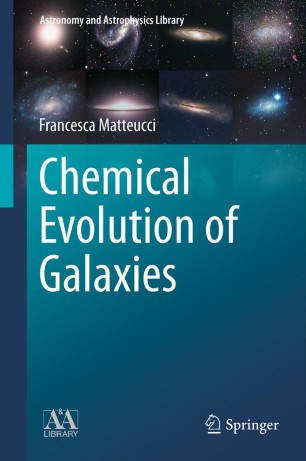 The term “chemical evolution of galaxies” refers to the evolution of abundances of chemical species in galaxies, which is due to nuclear processes occurring in stars and to gas flows into and out of galaxies.

This book deals with the chemical evolution of galaxies of all morphological types (ellipticals, spirals and irregulars) and stresses the importance of the star formation histories in determining the properties of stellar populations in different galaxies. The topic is approached in a didactical and logical manner via galaxy evolution models which are compared with observational results obtained in the last two decades: The reader is given an introduction to the concept of chemical abundances and learns about the main stellar populations in our Galaxy as well as about the classification of galaxy types and their main observables. In the core of the book, the construction and solution of chemical evolution models are discussed in detail, followed by descriptions and interpretations of observations of the chemical evolution of the Milky Way, spheroidal galaxies, irregular galaxies and of cosmic chemical evolution.

The aim of this book is to provide an introduction to students as well as to amend our present ideas in research; the book also summarizes the efforts made by authors in the past several years in order to further future research in the field.

Francesca Matteucci is associate professor at the University of Trieste, Italy, where she teaches Stellar Physics. Her field of research is the chemical evolution of galaxies of different morphological type, supernova rates and supernova progenitors.

“In order to evolve a galaxy, you must choose a mass of gas; decide on a prescription for turning it into stars … . Matteucci’s book explains … how to do all these things, ending with a discussion of cosmic chemical evolution … . anyone wanting to get up to speed quickly on the topic should find the book very useful. It is mercifully short and has lots of nice figures comparing models and data for abundance gradients, correlations of various elements, and so forth.” (Virginia Trimble, The Observatory, Vol. 132 (1229), August, 2012)
Buy options