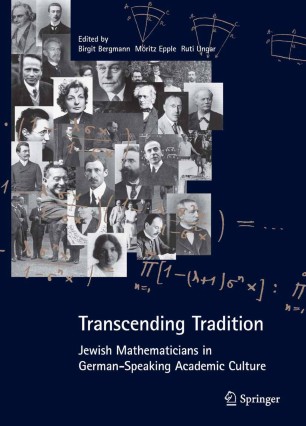 A companion publication to the international exhibition "Transcending Tradition: Jewish Mathematicians in German-Speaking Academic Culture", the catalogue explores the working lives and activities of Jewish mathematicians in German-speaking countries during the period between the legal and political emancipation of the Jews in the 19th  century and their persecution in Nazi Germany. It highlights the important role Jewish mathematicians played in all areas of mathematical culture during the Wilhelmine Empire and the Weimar Republic, and  recalls their emigration, flight or death after 1933.

“The book is a companion publication to an international exhibition with the same name as the title of the book. … It is divided into ten sections, corresponding to the ten sections of the exhibition. … The reviewer recommends the book under review for all university libraries, as well as for those individuals who have an interest in either mathematicians in modern Germany or Jewish mathematicians.” (Henry E. Heatherly, Mathematical Reviews, May, 2014)

“This is the English translation and extension of a German catalogue … . The main goal is to remind scientists and an interested broader public of the fact that mathematical life in pre-1933 Germany was to a considerable extent German-Jewish mathematical life, before it was destroyed by the Nazis. … gives literature for further study and important stimuli both for the memory of an irretrievable past and for a discussion of conclusions for the future interface between mathematics and society and culture at large.” (Reinhard Siegmund-Schultze, Zentralblatt MATH, Vol. 1234, 2012)