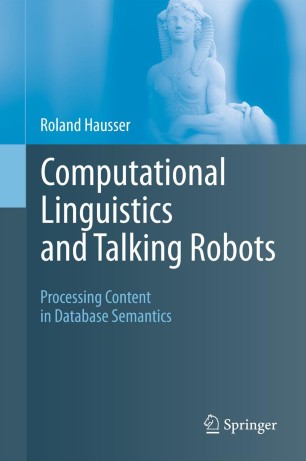 The practical task of building a talking robot requires a theory of how natural language communication works. Conversely, the best way to computationally verify a theory of natural language communication is to demonstrate its functioning concretely in the form of a talking robot, the epitome of human–machine communication. To build an actual robot requires hardware that provides appropriate recognition and action interfaces, and because such hardware is hard to develop the approach in this book is theoretical: the author presents an artificial cognitive agent with language as a software system called database semantics (DBS). Because a theoretical approach does not have to deal with the technical difficulties of hardware engineering there is no reason to simplify the system – instead the software components of DBS aim at completeness of function and of data coverage in word form recognition, syntactic–semantic interpretation and inferencing, leaving the procedural implementation of elementary concepts for later.

In this book the author first examines the universals of natural language and explains the Database Semantics approach. Then in Part I he examines the following natural language communication issues: using external surfaces; the cycle of natural language communication; memory structure; autonomous control; and learning. In Part II he analyzes the coding of content according to the aspects: semantic relations of structure; simultaneous amalgamation of content; graph-theoretical considerations; computing perspective in dialogue; and computing perspective in text. The book ends with a concluding chapter, a bibliography and an index.

The book will be of value to researchers, graduate students and engineers in the areas of artificial intelligence and robotics, in particular those who deal with natural language processing.