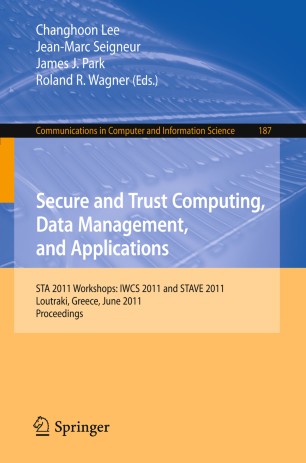 Part of the Communications in Computer and Information Science book series (CCIS, volume 187)

This book constitutes the refereed proceedings of two workshops held in conjunction with the 8th FIRA International Conference on Secure and Trust Computing, Data Management, and Applications, STA 2011, in Crete, Greece, in June 2011. STA 2011 is the first conference after the merger of the successful SSDU, UbiSec, and TRUST symposium series previously held from 2006 until 2010 in various locations. The 14 full papers of the IWCS 2011 and 10 papers of the STAVE 2011 workshop were carefully reviewed and individually selected from the lectures given at each workshop. The International Workshop on Convergence Security in Pervasive Environments, IWCS 2011, addresses the various theories and practical applications of convergence security in pervasive environments. The International Workshop on Security & Trust for Applications in Virtualized Environments, STAVE 2011, shows how current virtualization increases the sharing of compute, network and I/O resources with multiple users and applications in order to drive higher utilization rates, what replaces the traditional physical isolation boundaries with virtual ones.