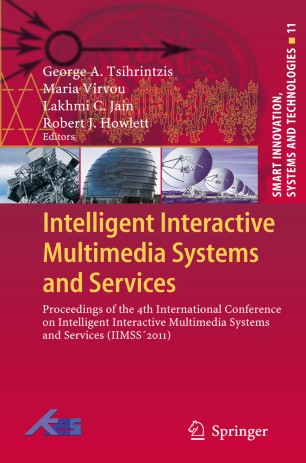 This volume contains the Proceedings of the 4th International Conference on Intelligent Interactive Multimedia Systems and Services (IIMSS-2011). IIMSS-2011 comes as a sequel to IIMSS-2008 (Piraeus-Athens, Greece, July 9, 10 and 11, 2008), IIMSS-2009 (Mogliano Veneto (near Venice), Italy, July 15, 16 and 17, 2009) and IIMSS-2010 (Baltimore, USA, July 28, 29, and 30, 2010). This fourth edition of the IIMSS Conference was organized jointly by the Department of Informatics of the University of Piraeus, Greece and the School of Electrical and Information Engineering of the University of South Australia, in conjunction with KES International.

At a time when computers are more widespread than ever and computer users range from highly qualified scientists to non-computer-expert professionals and may include people with special needs, interactivity, personalization and adaptivity have become a necessity in modern multimedia systems. Modern intelligent multimedia systems need to be interactive not only through classical modes of interaction where the user inputs information through a keyboard or mouse. They must also support other modes of interaction, such as visual or lingual computer-user interfaces, which render them more attractive, user friendlier, more human-like and more informative. IIMSS is a new series of international scientific conferences aimed at presenting novel research in the fields of intelligent multimedia systems relevant to the development of a new generation of interactive, user-centric services.