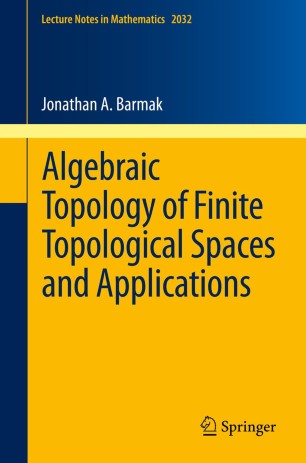 This volume deals with the theory of finite topological spaces and its
relationship with the homotopy and simple homotopy theory of polyhedra.
The interaction between their intrinsic combinatorial and topological
structures makes finite spaces a useful tool for studying problems in
Topology, Algebra and Geometry from a new perspective. In particular,
the methods developed in this manuscript are used to study Quillen’s
conjecture on the poset of p-subgroups of a finite group and the
Andrews-Curtis conjecture on the 3-deformability of contractible
two-dimensional complexes.
This self-contained work constitutes the first detailed
exposition on the algebraic topology of finite spaces. It is intended
for topologists and combinatorialists, but it is also recommended for
advanced undergraduate students and graduate students with a modest
knowledge of Algebraic Topology.

“This book deals with the algebraic topology of finite topological spaces and its applications, and includes well-known results on finite spaces and original results developed by the author. The book is self-contained and well written. It is understandable and enjoyable to read. It contains a lot of examples and figures which help the readers to understand the theory.” (Fumihiro Ushitaki, Mathematical Reviews, March, 2014)

“This book illustrates convincingly the idea that the study of finite non-Hausdorff spaces from a homotopical point of view is useful in many areas and can even be used to study well-known problems in classical algebraic topology. … This book is a revised version of the PhD Thesis of the author. … All the concepts introduced with the chapters are usefully illustrated by examples and the recollection of all these results gives a very nice introduction to a domain of growing interest.” (Etienne Fieux, Zentralblatt MATH, Vol. 1235, 2012)